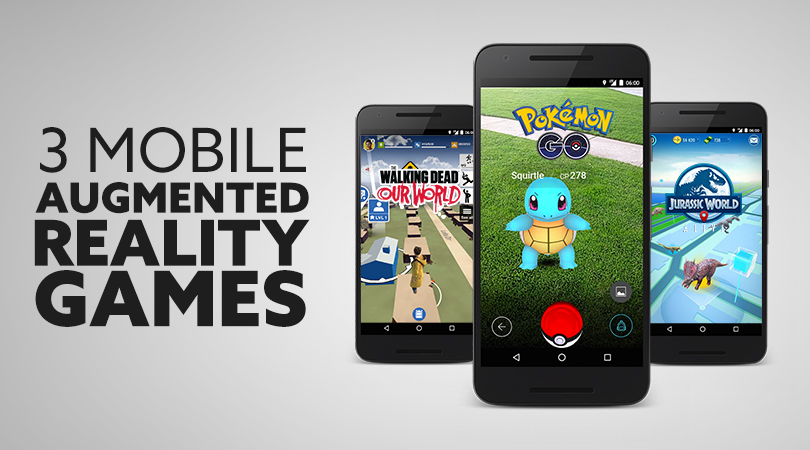 Do you like AR games? We have 3 best free AR games for you to play!

Niantic has released Pokemon Go at July 8th 2016, Above and beyond the official characters from the iconic Japanese video game, manga, TV and movie series, the game was a true pioneer in bringing augmented reality into the mainstream.

Players take on the role of a young Pokémon trainer and collect various Pokémon more than 370 Pokemons as of April 2018 in real locations by walking, biking, driving, and so on. GPS tracking follows you around a map that simulates real-world locations in real time. Where you encounter map icons that show where you can catch wild Pokémon, gather resources, and visit training gyms. The more ground you cover, the bigger your collection and the more energy you have.

Once you reach a high enough level, you can join a team and pit your Pokémon against those of rival trainers.

Pokemon Go is free to play, klik below for download:

The Walking Dead: Our World

Next Game has released The Walking Dead: Our World at July 12th 2018, it's the official mobile game of AMC’s The Walking Dead. It is a first-of-a-kind location based augmented reality game that immerses you into the zombie apocalypse. Defend your surroundings by fighting walkers on the streets, in the park, on your sofa - wherever you are and whenever you feel like it. Join forces with Rick, Daryl, Michonne and all your favorite characters from AMC’s The Walking Dead.

Play Season 9 missions every week after the new episodes air on TV and unlock fan favorite Heroes from The Walking Dead.
And remember: Aim for the head

The Walking Dead: Our World is free to play, klik below for download:

Ludia Inc. was released Jurassic World Alive at May 30th 2018.

Life finds a way, and in Jurassic World Alive, it's found a way to your neighborhood. Dinosaurs of all kinds now roam the streets, and it's up to you to find them, collect their DNA, and add their ferocious might to your collection. If you need a little extra strength in your lineup, you can combine the DNA of certain dinosaurs to create powerful new hybrid species.

Put together your own unique team of dinosaurs, and pit them against other players from around the world in global tournaments. And when you're not facing down packs of wild prehistoric creatures, take a few candid shots with your favorite dinosaurs using the augmented reality (AR) camera features.

Jurassic World alive is fre to play, tklik below for download:

So, what is your favourite AR games?