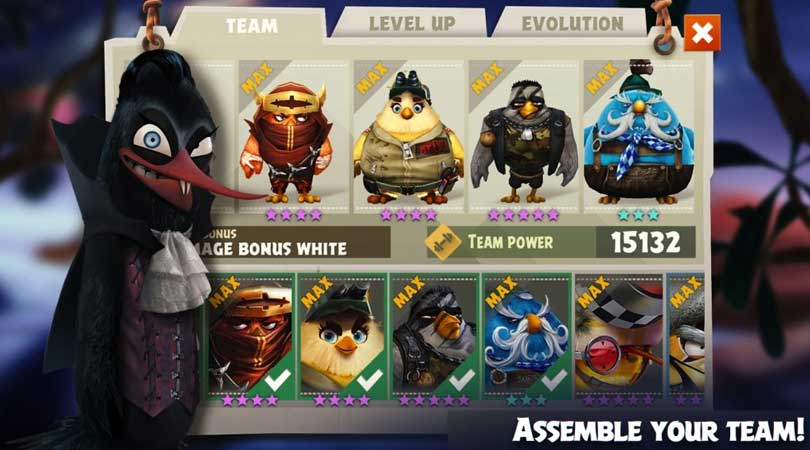 Start up Angry Birds Evolution, which violates all mobile design principles by forcing your screen into landscape mode permanently, and the battle begins almost immediately. Mechanically, it's a bit like pinball meets Final Fantasy. Instead of choosing attacks from a menu as in other turn-based combat games, you slingshot your birds in classic Angry Birds fashion, sending them careening around tiny combat arenas. As you progress, you accrue a larger team of birds, level them up, and take on tougher and tougher teams of inexplicably green pigs.

There's nothing particularly appealing, or fun, about Angry Birds as a brand, nothing iconic about an eternal battle of birds against pigs. As the developers have noted before, pigs became the antagonists only because the game's development happened to coincide with swine flu being in the news. What made the original game a hit was its stroke of design genius: Rovio found in the slingshot a perfect idiom for a touch interface. The great charm of Angry Birds was the joy of playing. The great charm of Angry Birds Evolution is that it's free.

Now, though, Evolution embodies an entirely different development strategy, one that recognizes that consumers are savvier than they used to be. It's a complete game that works, an original twist on the Angry Birds conceit, and exhibits some understanding of the broader gaming scene. It strives for irony, a postmodern savviness in the face of its own unconcealed profit motive; it jokes about the mainstream games it borrows ideas from, and piles on the schtick: There's a Zelda reference, a bird named Kim Fli Hy that's modelled after Kim Jong-il (concerning, if not quite racist), and a black-bobbed bird named Mia that we only now recognize as a Pulp Fiction reference. The jokes don't necessarily land, but they're there, and they represent an attempt to dress up a cash-in as something more personal and creative.