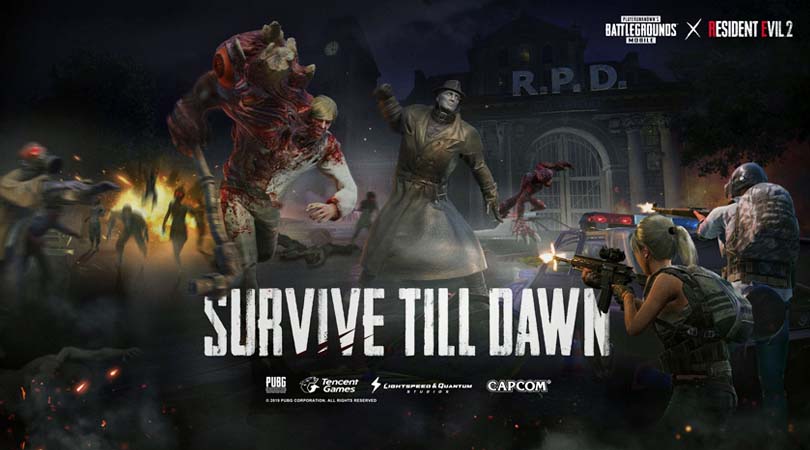 Update 0.12.0 arrives hot on the heels of Tencent Games and PUBG Corp’s announcement of the PUBG Mobile Club Open 2019 tournament. The $2.5 million esports tournament is officially sponsored by smartphone company Vivo who will be giving away smartphones to both players and fans during the tournament. The Spring Split Global Finals is scheduled to take place in July and will be held in Germany.

The main update menu is Darkest Night, an all-new game type where players must spend one night fending off waves of zombie enemies and fight to stay alive. Rather than parachuting in, players are placed randomly on the map to face zombie hordes during each of the three foggy nights. There is no single chicken dinner to earn this time and players may form an alliance to help each other to survive when unless the alliance decides turns on each other.”

The update also improves the Survive Till Dawn game mode. The Resident Evil 2 crossover mode has been revamped with new weapons such as the stun grenade and RPG-7, new jumping zombies, and zombie dogs. Zombies can also now climb onto roofs and over low walls.

In addition, a spectator mode has also been added into the game along with the ability to modify crosshairs and a new Popularity System.

Check out the new RPG-7 in action in the gameplay video after the break.
New Feature: EvoZone

New EvoZone Mode: Darkest Night
- Stay alive for one night while fighting zombies
- All teams that are still alive at dawn will win

Changes to Survive Till Dawn:
- Stun Grenades now also stun zombies
- Added Liquid Nitrogen Grenades to freeze enemies and reduce their movement speed
- Added jumping zombies and zombie dogs
- Some zombies can now climb over low walls or onto roofs
- Added RPG-7 and Jungle Style Magazines
- Flamethrowers now deal more damage
- M134 handling has been tuned
- Players will gain affixes that grant certain buffs
- Zombies now move slower after being hit by firearms
- Added Survive Till Dawn quick chat messages to Default and Classic voice packs
- Daily missions can now be completed in Survive Till Dawn
- Players can now spectate matches that their friends, Crews or Clan members are currently in, and view others' information while spectating as well as adjust Spectator Mode privacy settings
- Scope crosshair colors can now be changed in settings
- Portable Closets can now be swapped while in a match
- Spring Theme and Treasure is now available. Each draw guarantees a unique reward, and Sakura Dacia or Pink Rose Set is a guaranteed drop when drawing 10
- Popularity has been added to Spaces. Players can now show their support by giving LIKEs to one and become Partners with friends that have 400 Synergy or more. Partners will appear in each other's Spaces
- Players can now add Shop items as Favorites and be notified when these items are on sale
- Duplicated time-limited items will now be stacked to only show 1 icon per item with amount of time remaining (maximum duration is 999 days)
- New Achievements: Best Companion, Superstar, Winning Culture, Adventurer, Until Dawn, and A Step Too Far

Other Improvements
- Automatic door-opening has been tuned
- Dynamic weather odds have been tuned
- More buildings have been added to Dino Park, Coal Mines Goroka in V
- Crew Challenge qualifying round has been expanded, and top 10 teams now get unique outfits
- Emulator detection enhanced to stop emulator players from being matched with players on mobile devices
- Friend invitations now show map and lag information
- Quick Chat messages are now edited in Inventory
- Quick Chat messages can now be displayed as a wheel to make sending messages faster and easier
- Shadow effects can now be disabled to reduce resource consumption, heat and battery usage
- Added a reminder on dismantling duplicated items for Silver
- Previews are now available in some pages. Tap the reward icon to preview outfits
- Gallery now only show items currently in stock at the Shop
- Cloth Bandana (Leopard) with purchase has ended. Rewards for first purchase of the season will be updated
- RP Backpack now remember settings from the previous season
- Mythic outfit emotes can now be heard by more players
- Added haptic feedback to some buttons
- Added animation for dropping empty magazines when reloading
- Animation for throwing grenades while prone has been tuned
- Animation added for opening/closing doors
- Fixed a bug where hair was not displayed correctly when equipping certain headgear
- Fixed a bug where Season 6 Pants caused glitches in certain footgear
- Fixed a bug where doors were not displayed properly
- Fixed a bug where players may get stuck in buildings in certain areas

The new Update 0.12.0 now available on Google Play and the App Store. You can also run through the full patch notes on the PUBG Mobile official site.